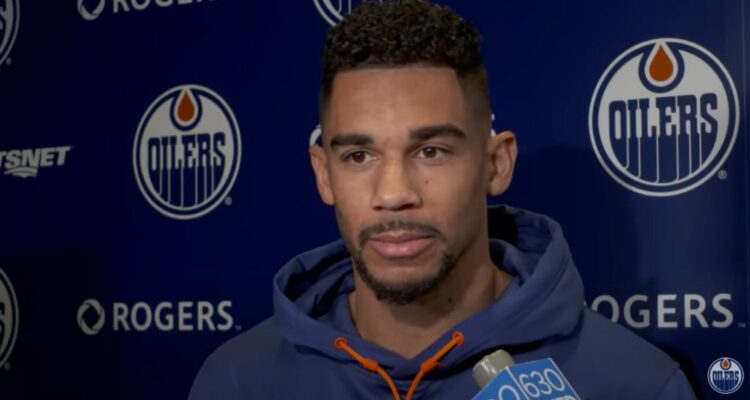 Evander Kane shared an update letting his fans and followers know he is on the mend following a grisly injury during a game against the Tampa Bay Lightning on November 8th.

About four minutes into the second period, Tampa Bay’s defenseman Philippe Myers knocked Kane to the ice with a hard check. As Kane falls to the ground the pucks ends up underneath him.

In a scrum for the loose puck Tampa Bay’s Pat Maroon makes contact with him. His skate appears to slice Kane’s left wrist that was lying on the ice while his knee hits him in the head.

Damn, scary situation for Evander Kane. Had his wrist cut by Maroon’s skate.pic.twitter.com/Fx43QMPTja

As you can see in the video above, Kane immediately gets up, puts his right hand on his left wrist to apply pressure and skates towards his bench while appearing to yell for assistance.

Following the game, Sportsnet report Gene Principe noted, ““This from Edmonton Oilers GM Ken Holland on Evander Kane. He has a deep cut on his wrist. He was stabilized and has gone to the hospital. Kane will have surgery on his wrist. He will be OK.”

He stated, “First and foremost everyone on our team, within our organization, probably most people in Edmonton are thinking about Evander Kane. And when an accident like that happens on the ice that’s where our first thought is. It’s never fun to see one of your teammates in that kind of position. But shoutout to the great medical staff we have within our organization and the people here at the arena that were quick to respond and make sure that he was okay.”

He then added, “The news that I’ve received so far, and it is very limited, is that he’s in a good spot and he’s getting well taken care of.”

“The news that I’ve received so far is that he is well taken care of.”

Kane updated his followers via social media noting he was “on the mend.”

He also stated, “Thank you all for the kind wishes and prayers from over the past several hours. Obviously last night was an extremely scary moment for me and I’m still in a little bit of shock.”

“I would like to thank the entire training staff of the Edmonton Oilers and Tampa Bay Lightning, along with all the doctors and paramedics who rushed to help treat and repair my injury. Without all of you I know things would’ve been much worse and I’m sincerely grateful.”

“I won’t be back next game, but I will be back and I look forward to being back on the ice playing the game I love alongside my teammates in front of our great fans,” he concluded.

The Oilers announced they placed Kane on long term injured reserve and expect him to be out between three to four months.

The team tweeted, “Oilers forward Evander Kane has been placed on LTIR & is expected to miss 3-4 months.”

“Mattias Janmark & Klim Kostin have been recalled from the Condors. We wish Evander the best in his recovery process,” the tweet concluded.

Coach Woodcroft provided a further updated saying, “First of all, I did get a chance to talk to him. He’s in good spirits. He came through his procedure pretty well. Everybody seems to be in a good spot with where it’s at. And the good news for Evander and our team is that he’s meeting us down in Florida. So he drove in a town car from Tampa Bay to Miami or Fort Lauderdale yesterday.”

“He’s in a good spot. He’s stabilizing. He’s going to be around his teammates an eventually he’ll fly home with us when we go back to Edmonton,” he continued.

Woodcroft added, “He’s in a good place physically, in a good space mentally. And now it’s just about making sure he takes the time to convalesce properly and get up to speed and let time take it’s course.”