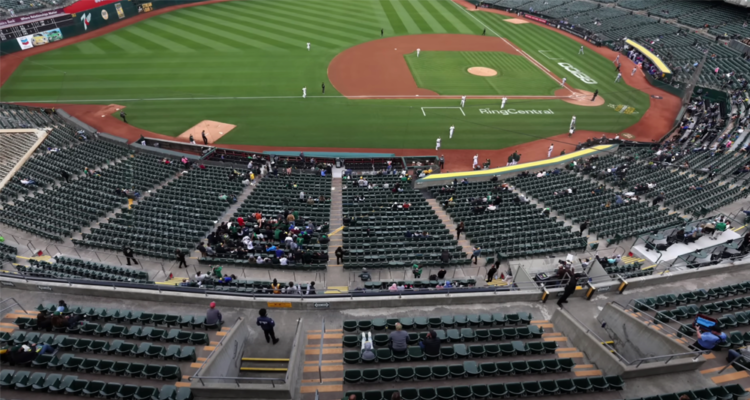 The Oakland A’s continue to slide closer to the city’s exit doors, with A’s President Dave Kaval recently telling reporters that failed discussions on a new ballpark in the Bay Area have “all but doomed our efforts” in Oakland.

MLB Commissioner Rob Manfred concurred with the assessment, stating he was no longer optimistic that the team will remain in Oakland, instead considering a potential relocation to Las Vegas, Nevada.

The Oakland A’s are a mainstay in the once-thriving city since moving there in 1968, having won four World Series titles and seven AL pennants. Regardless of the team’s on-field success, the franchise has consistently struggled to draw fans to the cavernous Oakland Coliseum, while the city around it has fallen apart. The city of Oakland, controlled entirely by Democrats since the 1960’s, is “widely regarded as being one of the most liberal major cities in the nation. The Cook Partisan Voting Index of Congressional District 13, which includes Oakland and Berkeley, is D+40, making it…the fourth most Democratic district in the US.”

Not surprisingly, this political arrangement has produced the mind-boggling combination of staggering high taxes, yet inexplicably rampant crime and homeless problems, a familiar one-two punch that is destroying other major progressive cities across the country like Chicago, Seattle and New York.

Oakland has the second highest combined tax rate in the country of 10.25% (second only to Tacoma, WA at 10.3%). Yet those high taxes have done nothing to solve either the rampant crime or homeless problems swamping the east bay. Oaklanders have a 1 in 77 chance of becoming a victim of violent crime and a 1 in 19 chance of suffering a property crime. There are 511 crimes per square mile in Oakland, while the national median is 26.9. It’s bad enough that the local news celebrates when they can go a single week without someone being murdered.

To put those numbers in perspective, Oakland A’s third baseman Ernie Clement got one base hit in 18 at bats this season.  That means as a local Oaklander, you have the same odds of seeing Clement cross home plate as walking outside and finding your car missing from your home driveway.

The homeless problem in Oakland has also gotten so bad, YouTube channels dedicate time driving the streets to document the urban decay that has overwhelmed the city. Even hyper-progressive actress Susan Sarandon recently shared a clip of Oakland’s streets filled with homeless encampments and debris, comparing the spectacle to a third-world country.

RELATED: Charles Barkley Says San Francisco Needs To Clean Up “All The Dirtiness And Homelessness”

This situation has helped exacerbate the pending decision by the Oakland A’s to join families, corporations and the NBA’s Golden State Warriors and Las Vegas Raiders in fleeing this dumpster fire on the east bay. Since the 2003 book Moneyball by Michael Lewis, baseball fans have understood the unique budgetary challenges within the Oakland franchise and their struggles to compete against much richer MLB clubs like the Yankees, Dodgers, Giants and Red Sox. As families and businesses flee both the Bay Area and California due to high taxes and rising crime, there are less people to buy tickets to games or rent expensive corporate suites that professional sports revenues depend upon.

More importantly, as these same groups move to better managed states like Texas or Florida, the annual tax revenues decrease, leaving less money for city councils to consider approving a new stadium for multi-million dollar owners (especially when they’re unable to even account for their current funding to solve homeless issues).

It’s a death spiral of increasingly lower funded teams being watched by less fans in an aging facility adrift in a sea of lawlessness. This scenario culminated in the past season where the Oakland A’s drew less that 10,000 fans per home game. To understand how awful that number is, if the Oakland A’s were a WNBA team, they would be only the second-most watched team in that league (with the Seattle Storm averaging 10.6K fans per night).

RELATED: Top 5 Cities In Need Of A New MLB Franchise

In addition, the Bay Area features the two closest (by distance) major league parks in the entire country, with only 15 miles separating Oakland Coliseum and Oracle Park (San Francisco Giants). However, the Giants consistently average over 30,000 fans a game and typically operate at over 90% capacity regardless of the quality of the on-field product.

How much more time do the A’s have left in the city of Oakland? Judging by the comments from MLB and the worsening conditions in Oakland: not long. Their lease at the Coliseum ends after the 2024 season. Even though they haven’t even finalized a new location, nor started construction on a new stadium in the desert, the fact that they’re still willing to begin rhetorically packing their bags for Vegas says the A’s have finally learned what many people have already figured out: it can’t be worse than Oakland.

What are your thoughts? Let us know in the comments below and across social media.