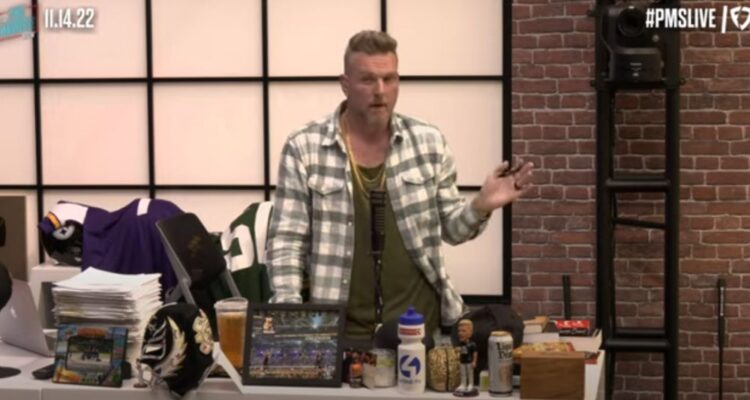 Pat McAfee Roasts Critics Of Jeff Saturday After He Leads Colts To Win Over Raiders: “F***ing Losers On Television Who Felt The Need To Be Puppets””

Following the Colts 25-20 win over the Raiders, McAfee did not beat around the bush as he gloated about the victory and sent a message to those in the media who were critical of Saturday and pushed the woke narrative lead by the NFL Network’s Ian Rapoport that Saturday was unqualified and potential black coaches should be upset he was hired over them.

If you recall, Rapoport reacted to the hiring of Saturday as the interim head coach saying, “Imagine being a very qualified minority candidate and seeing Jeff Saturday hired as interim coach with literally no experience except being a high school coach in Georgia. I mean it’s mind boggling and if there’s frustration around the league from really qualified assistants, coordinators, especially those who are minorities. With this certainly all of this is understandable.”

He added, “No doubt we’re going to be hearing more about that as we should over the next couple of weeks regardless of what happens with the Colts hiring Jeff Saturday as the interim coach.”

From NFL Now: The #Colts hire Jeff Saturday as their interim coach, a move that no doubt highly qualified candidates who are minorities have noted. pic.twitter.com/BU0RgY35LX

A variation of that narrative was picked up by former Cleveland Browns offensive tackle Joe Thomas, who appeared on Good Morning Football, and said, “When you hire your drinking buddy to be the head coach of an NFL football team, it is one of the most disrespectful things I’ve ever seen in my entire life to the commitment, the lifestyle, and the experience that it takes to be an NFL coach, any coach, much less the head coach of the Indianapolis Football Colts.”

“You have got to be  kidding me that this something Jim Irsay and Jeff Saturday, who is not blameless for accepting the job, could have talked and decided that this was the best thing for the Indianapolis Colts at this juncture of the season,” he added.

Joe Thomas does not hold back here

Pro Football Hall of Fame coach  of the Pittsburgh Steelers Bill Cowher also shared his thoughts saying, “You know guys, I played in the National Football League five years. I went on to become an assistant coach right from playing to coaching. I was an assistant coach for seven years. Blessed to be able to go to Pittsburgh and be a head coach at the age of 34 for 15 years. I’m speaking on behalf of the coaching profession.”

“I know for a fact that Jeff Saturday was offered an opportunity to become an assistant coach with the Indianapolis Colts multiple times in the last four years. He declined citing he had a TV job and wanted to spend more time with his family. I get it. Coaching is about commitment and it’s about sacrifice. It’s not just a job. It’s a lifestyle,” he stated.

RELATED: Pat McAfee Slams NFL For Restricting His Show’s Use Of Team Logos: “It’s Been Great Doing Business With You”

Cowher continued, “That being said Jeff Saturday has taken a position this year as a consultant for the Indianapolis Colts and he’s talked to them weekly in his home at Atlanta. Now to find out on Monday, in that short period of time, he’s now the head coach of the new Indianapolis Colts, overseeing a staff that he chose not to join because of a lifestyle.

Jeff Saturday talked about in his first press conference the fact that he’s going to use his second half as an opportunity to build his resume, to see whether he can coach in the future,” he said. “I say to that what about the assistants on the staff right now. The guys that were there in training camp. The guys that were there early in the morning and late at night. The guys that have gone through the first six weeks in that building.”

After listing out a number of assistants, Cowher stated, “For an owner to hire a coach that has never been an assistant at the college level or the pro level and overseeing very much a lot of candidates that are qualified for that job as we see in Steve Wilkes, an opportunity to build a resume, it’s a disgrace to the coaching profession. And regardless how this thing plays out what happened in Indianapolis is a travesty.”

“It’s a disgrace to the coaching profession.”@CowherCBS‘s emotional reaction to the Colts hiring Jeff Saturday. pic.twitter.com/B8QCSJZpPW

McAfee responded to these critics saying, “It has been a little difficult to sit here and relax and not just completely go bananaland about Jeff Saturday, friend of mine, former teammate, taking over the Indianapolis Colts team, which was completely inept before this week.”

“It’s been difficult not to just, you know, kind of start diving into the hypocrisy of the f***ing losers on television who felt the need to be puppets, ‘Tell me what to say. Tell me how I should feel. You put me on your television, I don’t have any actual thoughts of my own because if I did have thoughts of my own it wouldn’t sound anything like what I’m saying right now.’

After mocking Thomas as a puppet he then shared a clip of him on his show where he claimed he was throwing his hat in the ring to be the next coach of the Cleveland Browns.

Reacting to this, McAfee said, “I don’t think Joe Thomas is a bad guy. I think he’s a puppet. I don’t think he’s a bad guy. I think he felt obligated to say something because somebody told him how disrespected they felt as opposed to looking at it from a realistic point of view. This is an interim head coaching role. The Indianapolis Colts have underwhelmed everybody on Earth including their fan base literally since the jump this season when they tied the f***ing Houston Texans in Houston, and the Houston Texans are the Houston Texans.”

McAfee also responded to Cowher saying, “So if [Cowher] maybe caught a bunch of fire whenever he got hired for not earning and deserving the job that he took and he now wants to protect that on Jeff Saturday he can take that up with himself. But Bill Cowher, shut the f*** up, dude.”

“He said, ‘Why didn’t John Fox get the job? Why didn’t Gus Bradley get the job?’ It’s their first year in the building and to be honest the team has stunk since they got there,” McAfee asserted.

The Colts are currently second in the AFC South behind the Tennessee Titans. They are 4-5-1. Jeff Saturday is 1-0. The team plays the Philadelphia Eagles next on November 20th at 1:00 PM ET.

What do you make of McAfee taking the critics to task after Saturday led the Colts to victory over the Raiders?

NEXT: Aaron Rodgers Responds To Critics After Packers Fall To Detroit: “I Don’t Give A S*** What Any Of These Experts On TV Have To Say”