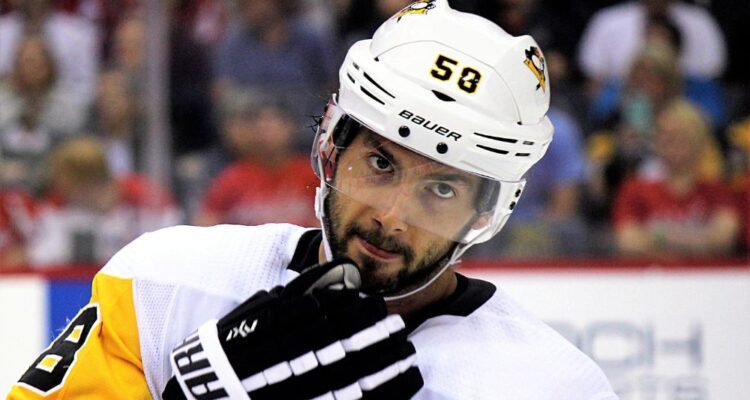 Kris Letang, defenseman for the Pittsburgh Penguins, on ice during a game on October 11, 2017. Photo Credit: Michael Miller, CC BY-SA 4.0 , via Wikimedia Commons

The Pittsburgh Penguins provided an update on their star defenseman Kris Letang after announcing he would be out indefinitely after suffering a stroke.

On November 30th the Penguins announced that Letang suffered a stroke on Monday and he would be out indefinitely.

They also noted in that statement that he was “not experiencing any lasting effects of the stroke and will continue to undergo a series of tests over the next week.”

Pittsburgh Penguins General Manager Ron Hextall stated, “Kris reported symptoms to the training staff on Monday and was immediately taken to the hospital for testing.”

He added, “The test results were shocking to hear, but we are grateful that Kris is doing well. We are thankful to the medical staff and the physicians at UPMC. He is a warrior on the ice, but first and foremost, he is a son, father, husband and friend. His health is our number one priority.”

Letang noted, “I am fortunate to know my body well enough to recognize when something isn’t right.”

“While it is difficult to navigate this issue publicly, I am hopeful it can raise awareness,” he added. “It is important for me that my teammates, family and the fans know that I am okay. I am optimistic that I will be back on the ice soon.”

In an update shared later in the day on November 30th, the team provided further details on the stroke. They noted, “Kris Letan called head  athletic trainer Chris Stewart, saying he had a migraine and that something didn’t feel right. After he reported those symptoms, head team physician Dr. Dharmesh Vyas said to take the defenseman to the hospital immediately.”

The Penguins continued, “After getting some tests done, it was determined that Letang had suffered a stroke. He is not experiencing any lasting effects, and will continue to undergo a series of tests over the next week. The condition is not considered to be career-threatening.”

This isn’t the first time Letang has suffered a stroke. He previously suffered one back in 2014 that resulted in him missing over two months. It was discovered that the cause of the stroke was a small hole in the wall of his heart.

The Penguins revealed that this most recent stroke “is much less severe than the one Letang suffered eight years ago.”

Hextall explained, “This was much less severe than what happened to him eight years ago, and I think there’s a lot of comfort in that for him.”

In fact, Penguins head coach Mike Sullivan indicated that Letang wanted to get back on the ice and begin skating.

“We’re all hopeful here that he’s going to be okay, and that he can continue to play and help us win,” Sullivan said. “The biggest challenge for me today was to try to find a way to keep him off the ice. He wanted to skate today. That’s just an indication of Tanger’s passion to play and wanting to get back with his team.”

Hextall echoed Sullivan’s comments while also sharing how much Letang means to the Penguins not only as a player, but as a person.

Hextall concluded, “He was talking last night about, ‘when can I skate?’  He’s a terrific human being, and he’s one tough S.O.B.”

Letang has played his entire NHL career with the Pittsburgh Penguins beginning in the 2006-2007 season. He’s played in a total of 962 games, scored 145 goals and racked up 517 assists for a total of 662 points.

His assist total is a franchise record for the Penguins for a defenseman, a record he broke in 2018 when he potted his 441st assist against the Montreal Canadiens in a 5-1 loss. He also holds the record for most goals scored by a Penguin defenseman. He set that record in 2019 in a 4-1 win over the Philadelphia Flyers surpassing Paul Coffey.

The Penguins are currently fourth in the Metropolitan Division with a record of 11-8-4. If the playoffs began today they would be sitting in the last wild card spot.

Letang is a huge part of the Penguins and they will definitely miss his services.

NEXT: NHL Denies The Truth And Reality, Embraces And Promotes Transgender Idol Worship