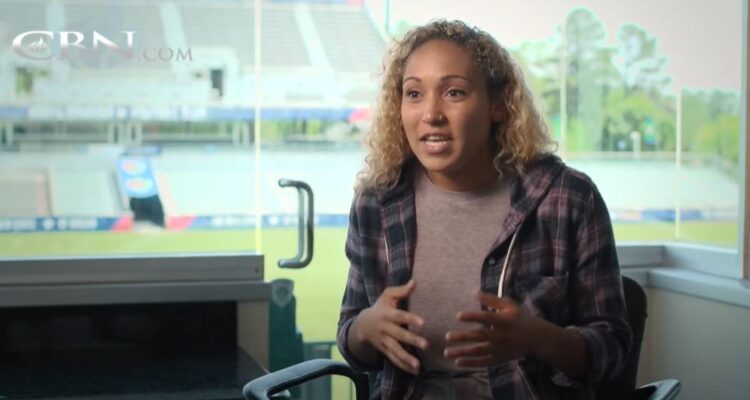 A player for the National Women’s Soccer League (NWSL) caused controversy after she decided to skip last Friday night’s game.

The North Carolina Courage chose to celebrate the LGBTQIA+ community by requesting all of their players wear pride-themed jerseys during the game against the Washington Spirit.

She chose to sit out with a Courage spokesman telling WRAL Sports Fan, “Jaelene will not be rostered tonight as she has made the decision to not wear our Pride jersey.”

“While we’re disappointed with her choice, we respect her right to make that decision for herself. We’re excited to celebrate the LGBTQIA+ community with our fans, players and staff tonight and look forward to hosting our first ever Pride Festival before kickoff,” the spokesman added.

Whether you agree with her or not, it can’t be questioned that Daniels stands by her principles. In 2015, after gay marriage became legal across the United States, she spoke out against the Supreme Court ruling.

In a post to Instagram she wrote, “My heart is that as Christians we don’t begin to throw a tantrum over what has been brought into law today, but we become that much more loving. That through our love, the lost, rejected, and abandoned find Christ.”

“The rainbow was a convent (sic) made between God and all his creation that never again would the world be flooded as it was when He destroyed the world during Noah’s time,” she continued. “It’s a constant reminder that no matter how corrupt this world becomes, He will never leave us or forsake us. Thank you Lord for your amazing grace, even during times of trial and confusion.”

“Love won over 2,000 years ago when the greatest sacrifice of all time was made for ALL mankind,” she concluded.

In 2017, she turned down the opportunity to play for the U.S. Women’s National Team (USWNT) because they also planned to wear pride-themed jerseys. At the time, Daniels explained why she opted out of the opportunity.

“I just felt so convicted in my spirit that it wasn’t my job to wear this jersey,” she said. “I gave myself three days to just seek and pray and determine what [God] was asking me to do in this situation.”

At the end of December last year, Daniels posted a statement to Instagram after she was signed by the Courage saying, “I remain committed to my faith and mydesire for people to know that my love for them isn’t based on their belief system or sexuality.”

“I pray and firmly believe that my teammates know how much I cherish them, respect them, and love them,” she added. “I believe they know this, because they know me, and I them. There is no place I’d rather be than with the Courage.”

The Courage penned an open letter to their fans apologizing for the impact re-signing Daniels had on their community.

On Instagram they wrote, “We are very sorry to all those we have hurt, especially those within the LGBTQIA+ community.” They then directed fans to their website.

On their website, the team wrote, “In response to the recent news of re-signing Jaelene Daniels, we as a club acknowledge the impact this announcement has on our community. We’ve spent the past few days reading your messages and reflecting on our actions. We are very sorry to all those we have hurt, especially those within the LGBTQIA+ community.”

“The decision to re-sign Jaelene was not made lightly and included significant conversations between organization leadership and Jaelene. The priority expressed in those conversations is the safety of our players and maintaining an inclusive, respectful space for the entire team.”

The message provided by the Courage and the alphabet mafia is simple–comply with endorsing the LGBTQIA+ lifestyle or be outcast as a bigot.