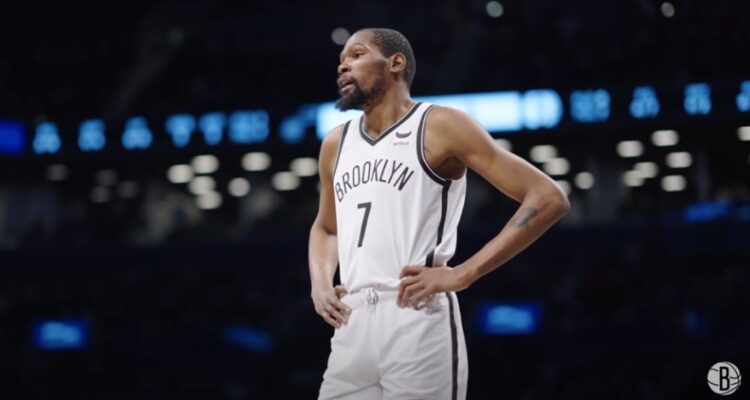 Just three months after reportedly demanding a trade, Kevin Durant has patched things up with the Brooklyn Nets. The Nets released a statement on Tuesday announcing that the two sides were moving forward together.

“Steve Nash and I, together with Joe Tsai and Clara Wu Tsai, met with Kevin Durant and Rich Kleiman in Los Angeles yesterday,” Brooklyn Nets GM Sean Marks said. “We have agreed to move forward with our partnership. We are focusing on basketball, with one collective goal in mind: build a lasting franchise to bring a championship to Brooklyn.”

Durant’s decision to return to the Nets is surprising considering that he had reportedly demanded Head Coach Steve Nash and General Manager Sean Marks be fired.

Unlike some other situations involving superstars requesting trades, the Nets had significant leverage. Durant is only at the beginning of a 4-year $194 million contract extension.

A summer of speculation regarding where Durant would be traded ended up being pointless. Multiple teams put in offers for the future hall of fame forward. From the beginning, it was reported that Durant’s preferred destinations were Miami or Phoenix. Other teams reported to have made offers were Atlanta, Toronto, and Boston.

The Celtics reportedly offered star guard Jaylen Brown as a part of a package to obtain Durant.

None of these teams were able to put forth a package that enticed the Nets to move Durant. With the 2022 season approaching they were able to convince their star to return. Durant will rejoin a team that includes fellow all-stars Kyrie Irving and Ben Simmons.

Although the presence of either of those two players cannot necessarily be counted on either. Kyrie made his own trade demand this summer, but has yet to be moved. Even if Irving is not traded before the summer it appears he plans to team up with LeBron James again in Los Angeles.

“Kyrie Irving is telling everyone he plans to go to LA, meaning the Lakers, as soon as he possibly can,” Stephen A. Smith said. “The likelihood is he’ll have to go through this season and then when he becomes a free agent after this season is over he plans on rejoining LeBron James in a Los Angeles Lakers uniform. They’ll have about $70-80 million under the cap. They’ll use it on Kyrie Irving — or so he believes.” Whether Durant returning has any effect on Kyrie’s future plans is unclear.

RELATED: NBA Doesn’t Schedule Any Games On Election Day, Will Engage In Political Activities The Day Prior

Ben Simmons is also a difficult teammate to count on. Unlike Kyrie, Simmons is signed to a long term contract and won’t be a free agent at the end of the year. However, Simmons didn’t play for the entire 2021-2022 season after forcing his way out of Philadelphia and then sitting out due to back issues following his trade to Brooklyn.

There have also been reports that Simmons ignored his teammates when they asked if he was ready to suit up for their playoff series.

The news of Durant returning answers questions for many fans around the league wondering if their team would make a trade for the unhappy superstar. But many questions still remain for the championship hopeful Nets.

What will the Nets look like with Kyrie, Simmons, and Durant on the floor at the same time? Will Kyrie bolt for Los Angeles in a year? Will Simmons disappear come playoff time like he did with the Sixers? All of these questions will make the Nets one of the most intriguing teams in the NBA this season.