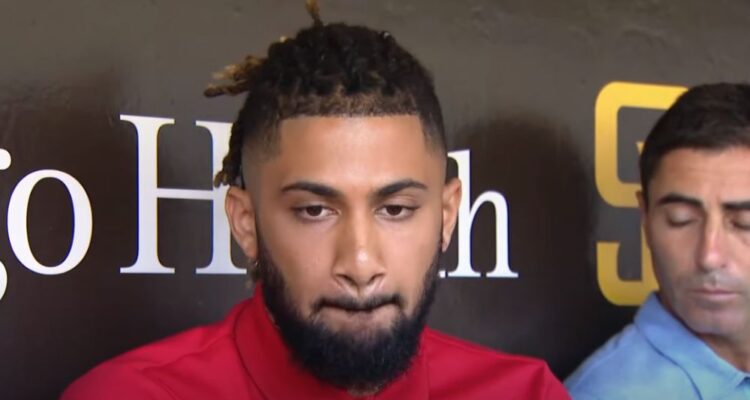 In his first press conference since being suspended 80 games for performance-enhancing drugs, Padres star Fernando Tatis Jr. apologized for his mistake.

He began the press conference saying, “At the end of the day, there’s not excuses. There’s no excuses and I need to do a way better job on what is going inside my body.”

“There’s no excusing these actions,” he reiterated.

Later in the press conference he asserted, “I’m going to remember how this feels, and I’m not going to put myself in this position ever again. I know I have a lot of love I have to gain back. I have a lot of work to do, it’s going to be a very long process.”

Tatis appears to be taking responsibility for his actions after initially making excuses for his positive test. When it was first announced that Tatis had tested positive for a drug called Clostebol, Tatis said that he had “inadvertently” taken the drug to treat ringworm.

In an apparent attempt to fool people into thinking that Clostebol, the anabolic steroid he tested positive for, was the same thing as Clobetasol a drug commonly used to treat ringworm and skin defects.

Twitter user Rany Jazayerli, who claims to be a dermatologist, reacted to Tatis’ original statement writing on the social media platform, “Okay, dermatologist speaking here: 1) We do not use Clostebol. We frequently prescribe *Clobetasol*, a potent topical steroid. 2) Clobetasol, which calms down the immune system, makes ringworm much *worse*, and is the absolute last thing we’d use for it.”

He added, “I only speak from my experience as a US-trained, board-certified dermatologist for 19 years. Maybe Clostebol is used to treat ringworm elsewhere, even though it makes no medical sense.”

“Or maybe Tatis googled Clostebol and was fed a bunch of results for Clobetasol instead.”

The young Padres shortstop received some tough love from his teammates following his suspension. “Very disappointed,” Padres pitcher Mike Clevinger said. “The second time we’ve been disappointed with him. You hope he grows up and learns from this and learns it’s about more than just him.”

The first time Tatis let his teammates down Clevinger is alluding to is when Tatis reportedly broke his wrist over the offseason in a motorcycle crash. Perhaps it’s more accurate to say “crashes” as Tatis was unsure which of his apparently many motorcycle crashes caused the injury.

As a result of the broken wrist, Tatis has not played for any of the 2022 season and will now miss the rest of this season and the beginning of the next due to his PED suspension. There is clear frustration coming from the Padres organization that has already invested $340 million dollars into a player who continues to show poor judgment off the field.

“He’s somebody that from the organization’s standpoint we’ve invested time and money into,” Padres General Manager AJ Preller said. “When he’s on the field, he’s a difference maker. You have to learn from the situations.”

“We were hoping that from the offseason to now that there would be some maturity, and obviously with the news today, it’s more of a pattern and it’s something that we’ve got to dig a bit more into, he added. “I’m sure he’s very disappointed. But at the end of the day, it’s one thing to say it. You’ve got to start showing by your actions.”

The Padres certainly hope that Tatis taking responsibility for his mistake and issuing an apology means he’s on the way to being a more dependable teammate. Especially after the blockbuster trade to bring in superstar Juan Soto, the Padres are in win now mode.  But in order to reach their full potential they’ll need Tatis to start making better decisions.

“He doesn’t owe me anything,” Padres outfielder Wil Meyers said. “But it’s a big step to do something like that. There are some steps to be made, and this is the first.”