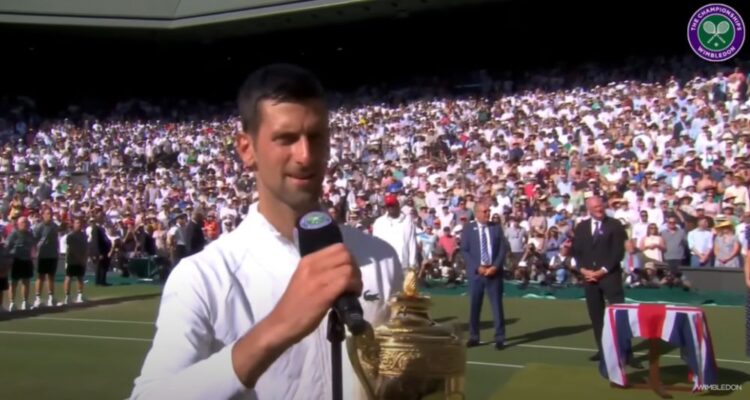 Tennis fans are taking to Twitter to call for Novak Djokovic to be allowed to play in the US Open after the CDC updated their Covid-19 guidance.

Djokovic, who is currently the 6th ranked player in the world according to the ATP Rankings and the most recent Wimbledon winner, previously indicated he would not be participating in the US Open due to the government’s policies regarding Covid-19.

In a pre-tournament press conference, Djokovic addressed the possibility of playing in the US Open saying, “I’m not vaccinated and I’m not planning to get vaccinated so the only good news I can have is them removing the mandated green vaccine card or whatever you call it to enter the United States or exemption. I don’t know. I don’t think the exemption is realistically possible. If that is a possibility, I don’t know what exemption would be about.”

“I don’t know. I don’t have much answers there.”

RELATED: John McEnroe Blasts Politicians For Refusing To Allow Novak Djokovic To Play In The US Open Over His Vaccination Status

In March, Djokovic revealed he would not be allowed to participate in the BNP Pairabas Open and the Miami Open citing CDC regulations requiring foreigners to be vaccinated in order to entire the country.

Djokovic wrote, “While I was automatically listed in the BNP Pairabas Open and the Miami Open draw I knew it would be unlikely I’d be able to travel.”

“The CDC has confirmed that regulations won’t be changing so I won’t be able to play in the US. Good luck to those playing in these great tournaments,” he added.

The CDC recently updated their guidelines posting on August 11th to Twitter, “Updated Covid-19 guidance to help you make informed decisions to protect yourself & others from severe illness. Knowing your risk & taking prevention steps, including vaccination & masking, can help you & loved ones from getting really sick.”

As part of this updated guidance the CDC now states, “Protection provided by the current vaccine against symptomatic infection and transmission is less than that against severe disease and diminishes over time, especially against the currently circulating variants.”

With this new guidance numerous tennis fans took to Twitter to call for Djokovic to be allowed to enter the country and play in the US Open.

Dr. Eli David tweeted, “There is ZERO medical or scientific justification to ban Djokovic from participating in the US Open. #LetNovakPlay”

Nicole Saphier, MD tweeted, “With the CDCs updated recommendations, does that mean Novak Djokovic can play at the US Open now?”

Outkick founder Clay Travis wrote, “How can Novak Djokovic be banned from playing in the US Open when the CDC just announced there is now no longer any difference between vaccinated and unvaccinated? He should be able to play. Period.”

Charles Bisbee MD also tweeted, “The CDC has officially stated that the vaccinated & the unvaccinated should have the same status. That it “makes the most sense to not differentiate.” IT’S TIME FOR THE US GOVERNMENT TO ALLOW DJOKOVIC TO PLAY IN THE US OPEN!”

Rita Panahi tweeted, “Will these changes be reflected elsewhere? Will Novak Djokovic be allowed to defend his title at the US Open.”

“Currently he’s banned due to covid vaccination status,” she added.

It’s possible this guidance could be a signal that Djokovic will be allowed to enter the United States and play in the US Open.

At the end of their updated guidance the CDC also noted, “In the coming weeks CDC will work to align stand-alone guidance documents, such as those for healthcare settings, congregate settings at higher risk of transmission, and travel, with today’s update.”

Do you want Djokovic to play in the US Open and defend his title? What do you think the CDC and the Biden administration will do?