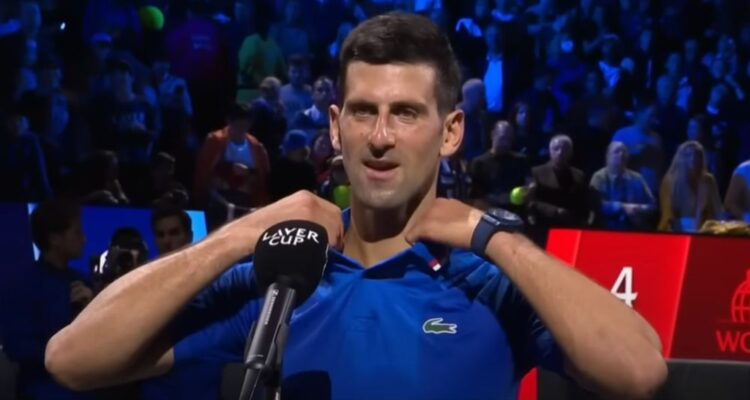 After Being Denied The Chance To Play The Australian Open This Year, Novak Djokovic Uncertain If He Will Play Next Year

Tennis great Novak Djokovic is still unsure if he will be allowed to play in the upcoming Australian Open. The 21-time major champion was deported from Australia last January due to being unvaccinated.

The Serbian tennis star has remained adamant he will not get the Covid shot. “I don’t have any regrets. I mean, I do feel sad that I wasn’t able to play (at the U.S. Open), but that was a decision that I made and I knew what the consequences would be,” he said Thursday. “So I accepted them and that’s it.”

Djokovic is a 9-time winner at the Australian Open, the most all time, but was denied the chance to add to that total last year due to the country’s absurd Covid regulations. Australia still requires anyone who enters the country to be vaccinated even though studies show the Covid shot does very little to prevent transmission of the virus.

Australia has had some of the strictest Covid policies throughout the pandemic resorting to full-on “quarantine” camps for infected citizens at one point. These draconian efforts have predictably done nothing to stop the effects of the virus. Two years later and Australia’s excess death rate is worse than Sweden, a country that had virtually no lockdowns.

Despite all of this data staring them in the face and the ineffective Covid vaccines, Australia still feels the need to ban Djokovic from participating in their annual tournament. Djokovic has been allowed to play in other tournaments around the world such as the French Open and Wimbledon, winning the latter.

The tennis legend has dropped to #7 in the world ranking primarily due to his lack of opportunity to compete. “I’m not used to making, obviously in the last 15-20 years, longer breaks between the tournaments, but it is what it is,” Djokovic said. “That’s kind of the situation I was in. I’m just excited to be able to play here now — and most of the other indoor (tournaments) for the rest of the season.” Djokovic has previously set the record for the longest run at #1 in the world breaking the mark set by recently retired Roger Federer.

Djokovic was also held out of the US Open this year despite a petition signed by more than 12,000 people demanding he be let in the tournament. “There is absolutely no reason at this stage of the pandemic to not allow Djokovic to play at the US Open 2022. US Government and USTA must work together to allow him to play. If unvaccinated American players can play, Djokovic as one of the legends of the game must be allowed to play. MAKE IT HAPPEN, USTA!” the petition said.

President Biden recently announced on 60 Minutes that the pandemic is over. Which is great news except nobody in their right mind actually thinks he’s in charge. A fact which was confirmed by his own White House immediately walking back those remarks.

Novak Djokovic continues to be a hero to many people across the world who have lost their jobs because of refusing the Covid jab or have been put in a position to get the shot under duress. The 35 year old Serbian star is set for life financially and has already cemented his legacy as one of the greatest to ever play the game.

But his willingness to stand up for what he believes is a beacon of hope to so many others who did not have the same amount of security to fall back on. Hopefully the world comes its senses and ends all the pointless vaccine requirements, until then we should continue to support pubic figures like Djokovic who are willing to stand up against the Covid regime.

Do you think Djokovic should be allowed to play in the Australian Open next year?

NEXT: John McEnroe Blasts Politicians For Refusing To Allow Novak Djokovic To Play In The US Open Over His Vaccination Status