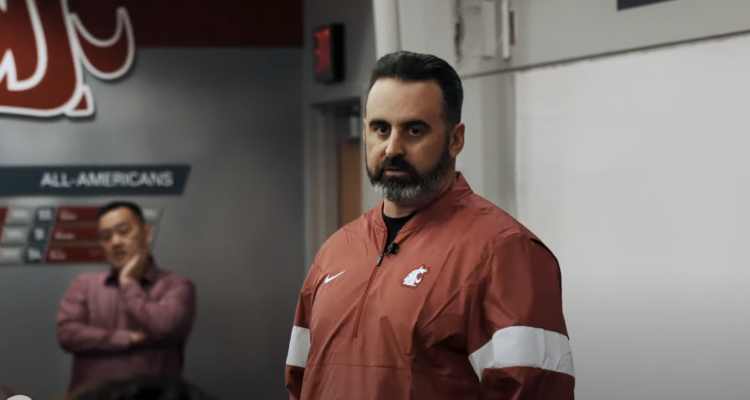 Former Washington State coach Nick Rolovich revealed why he did not take the Covid vaccine last year, a decision which ultimately led to his firing after some “ugly conversations” happened between him and the college’s administration.

Coach Rolovich sat down with sports reporter Allison Williams, host of the new Daily Wire exclusive series Breakaways, and spoke regarding his thoughts on the impacts of the controversial vaccine as well as how his stance as a traditional Catholic ultimately led to confrontations with other staff after he chose not to comply with the mandate.

Rolovich and four other assistant coaches were fired from Washington State in 2021 for their non-compliance with the state vaccine mandate. Because of this, Rolovich was unable to collect the estimated $9 million remaining on his contract with the school. Feeling his rights had been violated, he embarked on a $25 million wrongful termination suit against his former employers.

Washington State University coach @NickRolovich had it all. A winning team. A lucrative career. But when faced to choose between his religious beliefs or his career, he chose God.

Nick talks to @AllisonW_Sports about why conviction matters on BreakAways. Watch now on DailyWire+ pic.twitter.com/4DaEWJ3Cz7

“The priest broke it down to me,” said Rolovich. “Because he wanted to know why, and I said, ‘This is just how I’m feeling,’ and he says, ‘Well, that’s your conscience talking to you and the Catholic Church recognizes your conscience.’ That was what was speaking to me the whole time.”

“It was real hard because I was unvaccinated, couldn’t meet with the players. I’m stuck in my office all day. It was really unhealthy for me, but I have no regrets on my decision.”

RELATED: Brooklyn Nets’ Kyrie Irving: “Enforced Vaccine/Pandemic Is One Of The Biggest Violations Of Human Rights In History”

However, Rolovich made it clear that his biggest regret regarding the whole situation was not making it public earlier while still an employee at Washington State that he was not going to take the shot on the grounds of religious reasons.

One tense moment came with Pat Chun, the Washington State athletic director, who laid down the potential pathways things would go down if Rolovich decided to still not comply.

“[Chun] said, ‘You got four options: resign, get the vax, get a medical exemption, get religious exemption,” said Rolovich.

“I’m not getting the shot. I’m not resigning. I’m not going to get a medical because I could go get a fan card, easy, but then I’d be lying… I’m going to do a religious [exemption]. And they both said ‘We’re not going to believe you, you know, the governor’s not happy with you.'”

RELATED: After Update To CDC Guidelines, ESPN’s Sage Steele Demands Apology After She Was Allegedly Suppressed By The Disney-Owned Sports Network

Rolovich did choose the religious exemption route, which was even approved by the school’s Human Resources department, but Chun intervened and wrote a letter putting Rolovich’s reasoning into question, going as far as to call him a science denier. Because of Chun, Rolovich’s exemption was shot down.

Rolovich was not the only employee who was intentionally targeted for questioning the vaccine. David Fox, who was the school’s director of football operations, had asked the school’s professor of pathology and infectious diseases during a presentation made to the athletic department in a presentation regarding the vaccine, whether it had any long-term impact on women and their ability to become pregnant. This question upset Chun, who later decided he would not renew Fox’s contract with the school.

Rolovich was upset with Chun’s decision regarding Fox, saying “I already said to renew him, I was happy with the job he did.” A verbal argument spun out when Rolovich confronted Chun, and from there everything got worse.

For now, Rolovich doesn’t know whether he’ll ever be able to obtain another position coaching again, but if that’s the case, he’s at peace with it.

“Sitting here seven months later, to me, God was right, trusting that feeling and that belief really did end up helping me out.”

NEXT: Aaron Rodgers Says “Just About Every Conspiracy Theory Came True” Regarding Covid-19