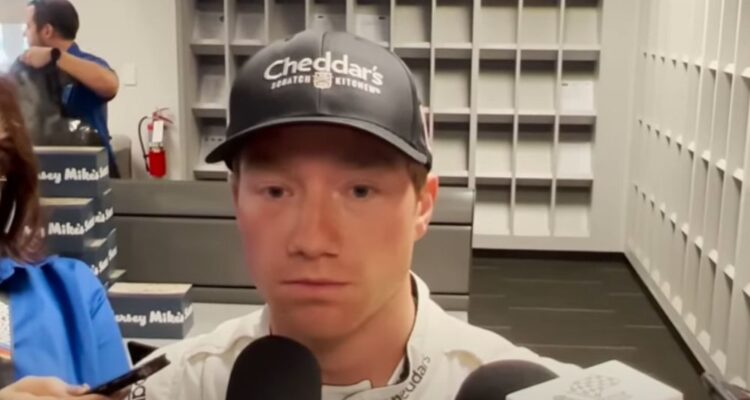 Tyler Reddick Says He Was Not Surprised That Kyle Busch Will Replace Him In The No. 8 Car Next Year

Ahead of the final race in the first round of the NASCAR Cup Series Playoffs at Bristol Motor Speedway, Tyler Reddick revealed he was “not surprised” that Kyle Busch was going to replace him in the No. 8 car at Richard Childress Racing (RCR) next year.

On Tuesday, September 13th, Busch announced he was joining RCR and would be driving the No. 8 saying, “o now for the moment that you all couldn’t wait for. I’m excited to announce that I’ll be taking my talents to Welcome, North Carolina to drive the No. 8 car for Richard Childress Racing starting in 2023. I’d like to introduce you to my new boss, Richard Childress.”

During the press conference Childress addressed the future of Tyler Reddick, who signed a contract to race with 23XI Racing in 2024 and is the current driver of the No. 8 car, “Tyler Reddick. I met with him about an hour ago and I explained to him that he wasn’t going to drive the 8 car next year. We’ve got a contract for him to drive for RCR next year and I wanted to talk to him before this official announcement. There’s been a lot of word and rumor out there, but I met with him about an hour ago.”

RELATED: Kyle Busch Joins Richard Childress Racing: “I Had To Find A Place Where I Knew I Could Go Win Races Immediately”

Childress further detailed during the Q&A portion of the announcement that the team would field three vehicles next year and Reddick would be driving the third car. He said, “Yes, we will have three charters.”

A press release further detailed, “Tyler Reddick, who is currently competing for a championship in the No. 8 Chevrolet, remains under contract at RCR and will drive for RCR in 2023.”

Reddick was asked about his conversation with Childress saying, “No, it wasn’t tense. He was just filling me in on what was going on and yeah, understand because I’m moving on. So, yeah, all good.”

Reddick then responded to a question about the short notice of the phone call and that he would not be driving the No. 8 next year,” None of it surprised me, honestly.”

“I think if anything it will probably help me move on to the next place, kind of getting used to working with different people, and going through that process,” he added

Reddick was then asked if he might not be driving for Childress next year, he replied, “It’s out of my hands. As I’ve said to everybody I’ve intended on finishing what I agreed to do at RCR and I want to see that through the end whether it was with the 8 car or whatever car it will be.”

“Richard has told me he will share a lot of those details or the details as he gets them,” he concluded.

Reddick was eliminated from the NASCAR Cup Series Playoffs following the race at Bristol. He finished the race in 25th. At Kansas he was involved in a wreck and finished in 35th, second to last. The first race of the playoffs at Darlington he finished third.

Reddick won his first NASCAR Cup Series race at Road America earlier this year. He followed that up with a second win at the Indianapolis Motor Speedway Road Course. However, his average finish is 17th. Over his short NASCAR Cup Series career he has two wins, 15 top 5’s and 38 top 10’s. He’s also won three poles and led a total of 442 laps.

What do you make of Reddick’s comments?

NEXT: Kyle Busch Answers Why A Deal Wasn’t Made With Joe Gibbs Racing After Making Announcement To Join Richard Childress Racing