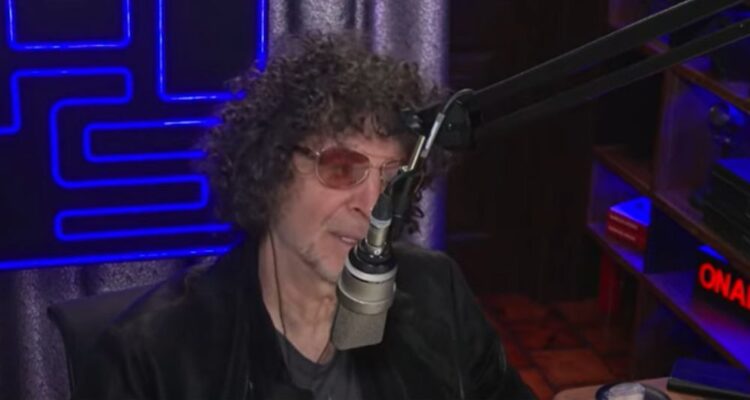 Shock jock Howard Stern decided to attack Kyrie Irving during his radio show on SiriusXM Radio where he made the implication that Irving is a Nazi.

Stern described the Brooklyn Nets star as a “f***ing moron” and a “douchebag” after his suspension for sharing a link to a film on Twitter.

Irving shared a link to the Amazon listing for Hebrews to Negroes: Wake Up Black America The Movie to his Twitter account without any commentary on the film.

He was then suspended by the Brooklyn Nets for not failing to properly condemn anti-Semitism in the way the media demanded him too.

Irving was asked by the media, “Do you have any anti-Semitic beliefs?” He replied, “Again, I’m going to repeat. I don’t know how the label becomes justified because you ask me the same questions over and over again, but this is not going to turn into a spin around cycle of questions upon questions. I told you guys how I felt. I respect all walks of life and embrace all walks of life. That’s where I sit.”

Irving previously addressed the media saying, “I grew up in a melting pot and I say a melting pot of all races: white, black, red yellow, Jewish, Christian, Muslim. And you can see the way I live my life now. I’m not here to be divisive so they can push their agenda — I don’t want to say they because I’m not identifying anyone one group or race of people, but I’m in a unique position to have a level of influence on my community.”

Seeing these answers as not bold or declarative enough, the Nets suspended him indefinitely for at least a minimum of five games.

They announced to Twitter, “Over the last several days, we have made repeated attempts to work with Kyrie Irving to help him understand the harm and danger of his words and actions, which began with him publicizing a film containing deeply disturbing antisemitic hate. We believed that taking the path of education in this challenging situation would be the right one and thought that we had made progress with our joint commitment to eradicating hate and intolerance.”

Following the suspension, Irving issued a statement to his Instagram apologizing.

He began, “While doing research on YHWH, I posted a Documentary that contained some false anti-Semitic statements, narratives, and language that were untrue and offensive to the Jewish Race/Religion, and I take full accountability and responsibly for my actions. I am grateful to have a big platform to share knowledge and I want to move forward by having an open dialogue to learn more and grow from this.”

Stern reacted to all of this by railing on Irving saying, “This Kyrie Irving, who is a complete douchebag. I mean what a f***ing — you know he’s a flat earther? Here’s Kyrie Irving. He’s a f**ing douchebag.”

Stern then revealed he has no idea what he’s actually talking about, “Unless you’ve been living under a rock, Kyrie was on Twitter and he promoted, he reposted a thing for a book and a movie about how the Jews are killing the world or something, something like that. And of course there was a s**t storm.”

Despite not having a clue about what he’s talking about, Stern continued, “So some reporter, here’s a great clip. This reporter went up to Kyrie Irving and you can see how test Kyrie gets because the reporter is saying, ‘Well, hey, you’re promoting this thing, this bulls**t on Twitter, how about it?’ And he’s like, ‘I’m not promoting it. What do you mean?’ He goes, ‘Well you retweeted it.’ ‘Well that doesn’t mean I promoted it.’ Just like playing a game of semantics. Just a f***ing moron.”

He then proceeded to mock the basketball star, “Just let me hate the Jews for God’s sakes. Don’t bust my balls. I just want to go on Twitter and hate Jews. Can’t you just leave me alone? Everyone hates Jews. Why ya picking on me? I’m just an NBA player. I don’t understand anything. A lot of people hate the Jews. Why ya picking on me? The Earth is flat. I think the Jews are lizards. Next question. Stop it. Leave me be.”

Stern then ironically stated, “I mean the whole world’s gone nuts. Everyone’s just feeling really empowered to say whatever dumb f***ing thing is on their brain. And then they go, ‘Oh come on, come on, man. Give me a break. Heil Hitler, now let’s move on. Heil Hitler. Hitler threw the Jews in the ovens. Leave me alone I just want to say things like that. I just want to say what I have to say.”

What do you make of Stern’s comments?

NEXT: Brooklyn Nets Reportedly Have 6 Demands Including Sensitivity Training That Kyrie Irving Must Meet In Order To Be Reinstated