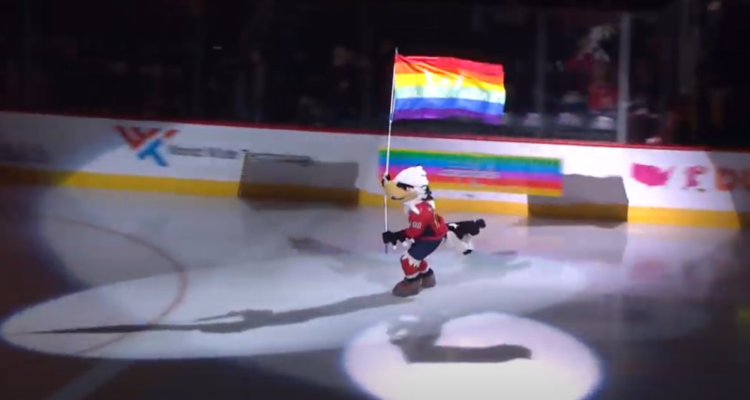 The Washington Capitals teamed up with grocery chain Giant Food to push disordered behavior via a lecture on pronouns and LBGTQ+ terminology.

The first of the four images is titled Pronouns. It reads, “What are they and why are they important? Pronouns are used to refer to someone in a way that accurately reflects their identity.”

The third image is also titled LGBTQ+ Terminology. It reads, “Transgender – a term that describes people whose gender identity is different from their sex assigned at birth. Queer – a term that makes space for the expression of identities and orientations outside of rigid categories associated with sex, gender, or attraction. Cisgender – refers to someone whose gender identity is the same as the sex assigned to them at birth.”

Finally, the fourth image claims to explain all the colors of what the Capitals are calling the “Progress Pride Flag.”

RELATED: World Cup Ambassador’s Interview Ended After He Says Homosexuality Is “Damage In The Mind”

The Capitals then followed this tweet up with a second one writing, “Create an open dialogue so you can support LGBTQ+ community members and become a better ally.”

What the Washington Capitals are attempting to do is have their fans and followers not only believe a lie, but also push the lie as well.

Bishop Michael Burbidge of the Catholic Diocese of Arlington writes in “A Catechesis on the Human Person and Gender Ideology” that the “claim that a person’s biological sex and personal identity have no necessary connection and could in fact contradict each other” is “a view of the human person contrary to the truth.”

In fact, he cites Pope Francis who told French journalist Dominique Wolton, “Let us not play with truths. It’s true that behind all this we find gender ideology. In books, kids learn that it’s possible to change one’s sex. Could gender, to be a woman or to be a man, be an option and not a fact of nature? This leads to this error. Let us call things by their names. ”

Not only does Bishop Burbidge note this transgender ideology is contrary to the truth. He also writes, “The claim to ‘be transgender’ or the desire to seek ‘transition’ rests on a mistaken view of the human person, rejects the body as a gift from God, and leads to grave harm. To affirm someone in an identity at odds with biological sex or to affirm a person’s desired ‘transition’ is to mislead that person.”

He continues, “It involves speaking and interacting with that person in an untruthful manner. Although the law of gradualness might prompt us to discern the best time to communicate the fullness of the truth, in no circumstances can we confirm a person in error.”

To that end Bishop Burbidge instructs the faithful not to use chosen names and pronouns adopted by individuals asserting a transgender identity.

He states, “Those asserting a transgender identity and/or seeking to “transition” often adopt new names and pronouns that reflect their desired identity and insist that others must use the chosen names and pronouns. Such use might seem innocuous and even appear to be an innocent way of signaling love and acceptance of a person. In reality, however, it presents a profound crisis: We can never say something contrary to what we know to be true.”

He then declares, “To use names and pronouns that contradict the person’s God-given identity is to speak falsely.”

“The faithful should avoid using “gender-affirming” terms or pronouns that convey approval of or reinforce the person’s rejection of the truth. It is not harsh or judgmental to decline to use such language. In the broader culture, Catholics may experience significant pressure to adopt culturally-approved terminology. However, in no circumstances should anyone be compelled to use language contrary to the truth,” he relays.

“The right to speak the truth inheres in the human person and cannot be taken away by any human institution. Attempts by the state, corporations, or employers to compel such language, particularly by threats of legal action or job loss, are unjust. We must love in the truth, and truth must be accurately conveyed by our words. At the same time, clarity must always be at the service of charity, as part of a broader desire to move people towards the fulness of the truth,” His Excellency says.

Not only does Bishop Burbidge give clear instruction to the faithful on the recent rise of transgender ideology, but the Catechism of the Catholic Church also provides clear instruction on Chastity and homosexuality.

It states, “Homosexuality refers to relations between men or between women who experience an exclusive or predominant sexual attraction toward persons of the same sex. It has taken a great variety of forms through the centuries and in different cultures. Its psychological genesis remains largely unexplained.

It continues, “Basing itself on Sacred Scripture, which presents homosexual acts as acts of grave depravity, tradition has always declared that ‘homosexual acts are intrinsically disordered.’ They are contrary to the natural law. They close the sexual act to the gift of life. They do not proceed from a genuine affective and sexual complementarity. Under no circumstances can they be approved.”

“The number of men and women who have deep-seated homosexual tendencies is not negligible,” it goes on. “This inclination, which is objectively disordered, constitutes for most of them a trial. They must be accepted with respect, compassion, and sensitivity.”

“Every sign of unjust discrimination in their regard should be avoided. These persons are called to fulfill God’s will in their lives and, if they are Christians, to unite to the sacrifice of the Lord’s Cross the difficulties they may encounter from their condition,” it instructs.

The Catechism concludes, “Homosexual persons are called to chastity. By the virtues of self-mastery that teach them inner freedom, at times by the support of disinterested friendship, by prayer and sacramental grace, they can and should gradually and resolutely approach Christian perfection.”

“It is part of nature. That’s how it is. Let us call it, then, ‘civil unions.’ Let us not play with truths,” he said.

It’s very clear that the Washington Capitals and Giant Food are not only lying to themselves, but they are doing even greater wrong by trying to push the lie they have willingly embraced onto others so not only will they believe it, but they will spread it as well.