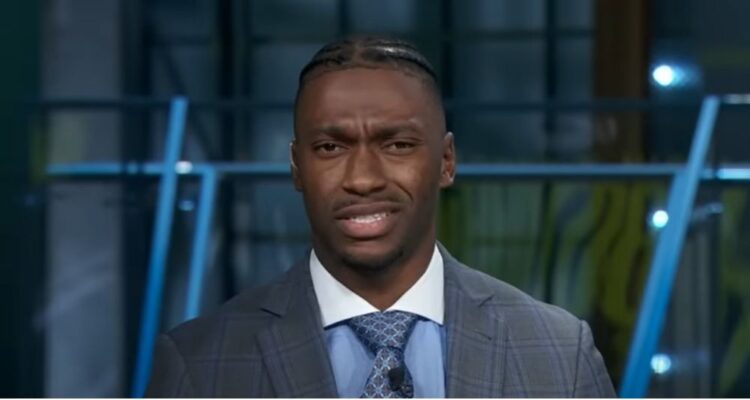 Former Washington Redskins quarterback Robert Griffin III did not like the NFL’s punishment of Deshaun Watson after the league determined he committed sexual assault.

The NFL opened an investigation into Watson after a civil complaint was filed against him alleging he engaged in “lewd and indecent sexual behavior during a private massage.” A total of 23  lawsuits would be filed against Watson alleging similar conduct.

Following the investigation, Retired judge Sue L. Robinson determined Watson had committed sexual assault explaining in a 16-page document, “I, therefore, find that the NFL has carried its burden to prove, by a preponderance of the evidence, that Mr. Watson engaged in sexual assault (as defined by the NFL) against the four therapists identified in the Report. Mr. Watson violated the Policy in this regard.”

She would then announce that Watson be suspended 6 regular-season games without pay and that he “limit his massage therapy to Clubdirected sessions and Club-approved massage therapists for the duration of his career.”

The NFL would appeal the ruling seeking a greater punishment for Watson. It was announced earlier this week that the organization came to an agreement with the NFLPA to suspend for Watson for 11 regular-season games and fine him $5 million.

Despite being found to have committed sexual assault by Robinson and being punished for it, Watson maintained his innocence in a press conference saying, “I’ve always stood on my innocence and always said that I’ve never assaulted anyone or disrespected anyone and I’m continuing to stand on that.”

“But at the same time I have to continue to push forward with my life and my career and for us to be able to move forward I have to be able to take steps and put pride to the side and I’m going to continue stand on my innocence and keep pushing forward and I’ve always, you know, stood on not disrespecting or sexual assaulting anyone,” he added.

When asked why he was apologizing he answered, “For everyone that was affected by this situation. There was a lot of people that was triggered.”

When a reporter asks about the women who accused him, he says, “I’ve apologized to all women so anybody that was affected even yourself, everything. So, I’m apologizing to everyone that was affected about this whole situation.”

Robert Griffin III, who was the quarterback for the Washington Redskins between 2012 and 2015 and joined the Cleveland Browns for a season in 2016 before finishing his career with the Baltimore Ravens, described the NFL’s deal with the NFLPA as “sickening.”

He wrote on Twitter, “The NFL had an opportunity to show it had learned from its ugly history on standing up for Women with this Deshaun Watson case and IT FAILED.”

“11 games and a 5 million dollar fine doesn’t fit what he was accused of doing and found to have done by Judge Sue L. Robinson. Sickening,” he declared.

Robert Griffin III would later appear on ESPN’s Monday Night Countdown where he was asked by host Suzy Kolber how the deal made him feel.

He responded, “Suzy, I think it’s more about how does it make you feel? How does it make all the women out there feel after this decision came down? Because you hear contradictory statements, there, from Jimmy Haslam saying that ‘Hey, he deserves a second chance.’ But what does he deserve a second chance for if he’s standing on his innocence?”

“For me, the NFL had an opportunity, here, to really look at the history that they had with standing up for women and supporting women, and come out and show that they learned from those lessons,” he stated. “And I feel like they failed miserably.”

And for me as a father of three daughters, soon to be four daughters, I’m sick for all the women out there for this that happened because when you look at what Sue L. Robinson ruled and found in this arbitration with the NFL it’s very clear that he qualified — everything that he did was qualified as sexual assault. He posed a genuine danger to the safety and well-being of another person, he undermined or put at risk the integrity of the NFL, and his conduct was determined to be non-violent. Sexual conduct and non-violent sexual assault.”

So for the people out there who are saying it’s he said she said and innocent until proven guilty, yes, Judge Sue L. Robinson  was not to convict Deshaun Watson, but she did state that what he did was not only against NFL rules, but honestly just terrible in general.”

Later during the segment, Griffin III added, “Deshaun Watson, we’ve all had that person in our lives who apologizes for how they made you feel, but they’re not apologizing for their own behavior. And that’s what I see here.”

“And we can’t go without saying that this isn’t a win for the NFL, it’s certainly not a win for the women out there who are affected, but it is a win for Deshaun Watson. It just seems like he continues to win no matter what is going on. And I just want to point to the fact that these women and the trauma that they are feeling from what happened with Deshaun Watson — nothing, no suspension, no amount of fine is going to quantify what they’re feeling,” he asserted.

What do you make of Robert Griffin III’s analysis of the agreement between the NFL and NFLPA to punish Watson with an 11-game suspension and fine him $5 million?

NEXT: Harris County District Attorney Says NFL Did Not Contact Her About DeShaun Watson