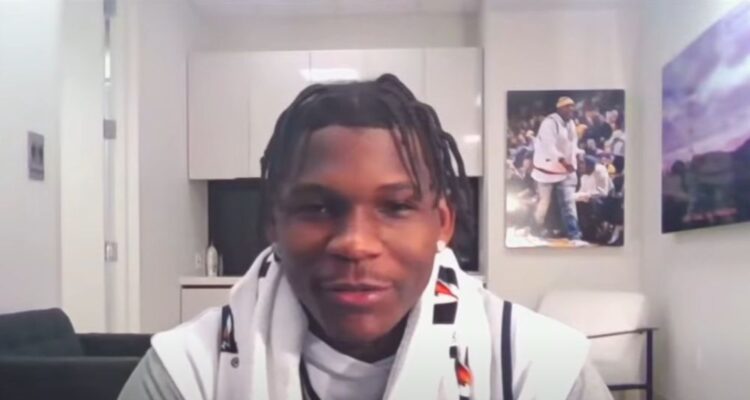 “Edwards has acknowledged that his actions were inappropriate,” the statement concluded.

The NBA’s statement doesn’t specifically identify what Edwards said that was finable, but he did recently post a short video to his Instagram Stories on September 10th of a number of men huddled together in various states of undress.

Edwards says in the video, “Look at these queer a** n*****, man. Look at the world I came to.” The video is also captioned, “Dese niccas different.”

Edwards issued an apology for the video on September 11th posting to Twitter, “What I said was immature, hurtful, and disrespectful, and I’m incredibly sorry.”

He added, “It’s unacceptable for me or anyone to use that language in such a hurtful way, there’s no excuse for it, at all. I was raised better than that!”

Edwards’ comments were clearly uncharitable and wrong, but identifying the sin of sodomy is not wrong.

The Catechism of the Catholic Church teaches, “Homosexuality refers to relations between men or between women who experience an exclusive or predominant sexual attraction toward persons of the same sex. It has taken a great variety of forms through the centuries and in different cultures. Its psychological genesis remains largely unexplained.

It continues, “Basing itself on Sacred Scripture, which presents homosexual acts as acts of grave depravity, tradition has always declared that ‘homosexual acts are intrinsically disordered.’ They are contrary to the natural law. They close the sexual act to the gift of life. They do not proceed from a genuine affective and sexual complementarity. Under no circumstances can they be approved.”

“The number of men and women who have deep-seated homosexual tendencies is not negligible,” it goes on. “This inclination, which is objectively disordered, constitutes for most of them a trial. They must be accepted with respect, compassion, and sensitivity.”

“Every sign of unjust discrimination in their regard should be avoided. These persons are called to fulfill God’s will in their lives and, if they are Christians, to unite to the sacrifice of the Lord’s Cross the difficulties they may encounter from their condition,” it instructs.

The Catechism concludes, “Homosexual persons are called to chastity. By the virtues of self-mastery that teach them inner freedom, at times by the support of disinterested friendship, by prayer and sacramental grace, they can and should gradually and resolutely approach Christian perfection.”

John Matrixx of Black and White Sports posits the NBA’s punishment of Edwards is inconsistent with its punishment of the Miami Heat’s Meyers Leonard who was fined $50,000 and suspended a week from using Heat facilities and participating in an all team activities back in March. He was also “required to participate in a cultural diversity program.” Meyers used the phrase “k*** b****” while playing Call of Duty.

NBA Commissioner Adam Silver stated at the time, “Meyers Leonard’s comment was inexcusable and hurtful and such an offensive term has no place in the NBA or in our society.  Yesterday, he spoke to representatives of the Anti-Defamation League to better understand the impact of his words and we accept that he is genuinely remorseful.  We have further communicated to Meyers that derogatory comments like this will not be tolerated and that he will be expected to uphold the core values of our league – equality, tolerance, inclusion and respect – at all times moving forward.”

Matrixx points out, “You notice that the language is just different? They just put offensive and derogatory language [instead of] actually saying anti-LGBT and racist language. There is a difference there.”

He also notes, “Something is definitely wrong with the NBA ever since post-George Floyd. Anthony Edwards is a black NBA player. Meyers Leonard a white NBA player. And they gave Meyers Leonard pretty much double the punishment, a bigger fine, for doing the exact same thing.”